Since 2011, JVC has been developing 4K precision projectors delivered by "e-shift" technology.

Today, reflecting the accelerating trend into the 4K and HDR era, JVC announced a new line of D-ILA projectors which comply with the latest HDMI/HDCP2.2 standard.

The performance boost is driven by a new high power lamp and further upgrades to JVC's original "e-shift" technology, a combination which delivers both high brightness and a high clarity 4K picture.

The Main Features for the new line up are:

JVC D-ILA imaging device has a narrow pixel gap to give high light efficiency and a smooth picture. Together with the new 265W high power lamp, the latest JVC projectors can produce powerful images with greatly increased brightness compared to our current X900R, X700R and X500R series models.

This large brightness boost helps deliver clear images on big screens, even under ambient light environments such as found in living room installations. 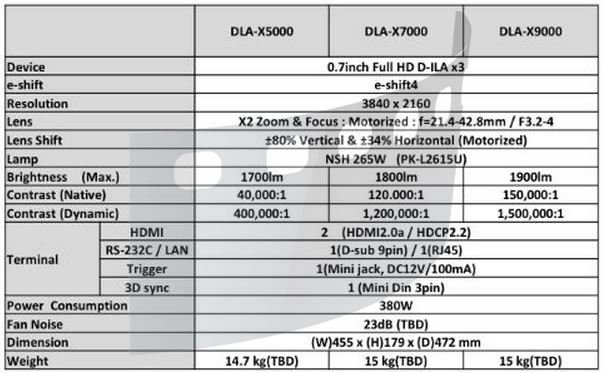 This is achieved by combining a new optical engine optimized for usage with the JVC D-ILA device, and the high power lamp, plus JVCs user-selectable Intelligent Lens Aperture to further boost contrast.

4. Compatibility to latest standard of HDMI/HDCP2.2

With the current expansion of 4K streaming and the next generation Blu-ray soon to be released, JVC has incorporated the latest HDMI/HDCP2.2 standard. Both HDMI inputs will be compatible so two 4K copy protection products can be connected directly.

the "e-shift" technology optimized for the combination of 4K60p compatibility and high brightness.

"Multiple Pixel Control" is another JVC original technology which improves the JVC projectors' performance. It is part of Super Resolution technology created with a unique JVC algorithm.

The latest "Multiple Pixel Control" employs a newly designed algorithm which will realize the ideal performance suitable for each scene. By selecting the Auto mode, natural and expressive 4K images can be enjoyed without any complicated picture adjustments.

The new JVC projectors will be equipped not only with JVC original blur reduction technology "Clear Motion Drive", but also with new technology called "Motion Enhance".

This technology will minimize the motion blurs significantly by optimizing the drive of the D-ILA device. Importantly it is also compatible for 4K and 3D signals, to give smooth and detailed image for a variety of images.

During the THX 3D certification process, more than 400 laboratory tests are conducted for performance on accurate colour reproduction, cross talk, viewing angle, video processing etc. This certification is evidence proving "High-Quality and High-Performance", giving the consumer the best entertainment performance now and for the future.

DLA-X9000 and DLA-X7000 are currently applying to obtain this certification.

9. "Auto Calibration Function*" to optimize the picture depending on the various setting environments

All of the new JVC projectors' can take advantage of "Auto Calibration Function*", which can calibrate the various pictures under various environments automatically, by using a 3rd party optical sensor available widely in the market. As a result, the picture performance will become optimum for the viewing environment. In addition, this can also compromise for the changing colour balance in long-term projector usage so the projector can be kept at its best performance.

*In order to use the "Auto Calibration Function", an optical sensor, exclusive software, PC and LAN cable is required.

(1) A "Film-like" image can be reproduced just like the original film by JVC's original "Real Colour Imaging Technology" (DLA-X9000, DLA-X7000)